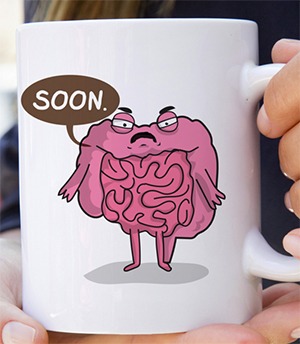 Why Does Coffee Make You Poop: A Scientific Investigation

You glance at your watch. Seeing that you’re late for work, you swig the last of your coffee, slip on your shoes and are about to run out the door when suddenly - it happens. You’re on a first date. Sitting in the coffee shop enjoying pleasantries and a double latte, you are in the middle of a great story when - it happens. Driving along the highway, singing along to the radio, you’ve got one hand on the steering wheel and one on your travel mug. With another sip of coffee and a brief harmonization with the chorus - it happens.

It is the sudden, unmistakable urge to poop. And not just any poop. A total evacuation of your bowels. The culprit? Your coffee. Why does coffee have this effect? How can it be that this most beloved and vital beverage should have such a strong, often inconvenient effect on your internals? Studies have found that upwards of 30% of coffee drinkers experience this colon-cleansing effect from coffee. Even for those who don’t feel the urge to visit the restroom, people still experience some distinct form of motor stimulation in their colon. While there are lots of theories, the truth is that we don’t really know for sure why this happens. But we can start by debunked some of the commonly held theories.

One popular theory is that caffeine is to blame. Proponents of this theory hold that since caffeine is a stimulant, these bowel movements are simply a response to that stimuli. Furthermore, caffeine is known to affect your gastrointestinal tract via its impact on your nervous system. The problem with this theory is that the timeline of caffeine’s effect on your digestive tract does not line up at all with the timeline from coffee to coffee-induced pooping. In addition, other caffeinated beverages do not have the same effect, whereas even decaffeinated coffee will cause this urge to defecate.

So if is the coffee, but not the caffeine in said coffee, what could it be? Some believe that these bowel movements are simply the result of coffee often being the first thing a person consumes in the morning, which is supported by the fact that many people say this effect is only felt in the morning. The idea is that the body is just waking up, your metabolism is jump started, and voila - it’s time to go. While this theory may hold some truth, it fails to explain why coffee specifically seems to have this effect. Many people who experience it have consumed other food or beverage before their coffee, and can attest to this distinctly strong and swift side effect.

One final theory has to do with the debate as to whether coffee is a diuretic, laxative, or somehow both. There is a widely held assumption that coffee dehydrates you. One reason is that coffee blocks the production of a hormone that allows you reabsorb water. But this doesn’t necessarily translate to dehydration from your morning coffee. Recent studies have suggested that in fact, moderate coffee drinking actually contributes positively to your body’s overall fluid intake more than it dehydrates you. Just as drinking water can increase your need to pee, so to can coffee. You can be left dehydrated you if you don’t replenish those fluids, but this property is not unique to coffee. Because of coffee’s relationship to many individual’s morning poop, coffee is also widely considered a laxative. But how can it be a laxative if it is a diuretic? The truth is that it may be neither. This brings us to the closest explanation we currently have as to why coffee affects so many bowels the way it does.

Coffee contains thousands of chemical compounds, and our digestive tracts are extremely complex and not very well understood. The potential interactions between coffee’s contents and their effects on your body through your digestive tract are countless. All we can say for sure is that coffee stimulates a multitude of hormonal and neural mechanisms in your body, only some of which are known. One contributing mechanism comes from the acids in coffee. The increased stomach acidity from drinking coffee can result in the production of gastrin and cholecystokinin hormones. In short, these hormones trigger things like acid production (which encourages intestinal movements), as well as stimulating your pancreas, gal bladder and hypothalamus (which, together, tell your brain it’s had enough to eat and stimulate other motor activities in your bowels).

In essence, coffee stimulates your colon the same way eating a 1,000 calorie meal would.

While this can certainly explain coffee’s ability to make you poop, there is probably a lot more going on than we currently understand. For example, women more susceptible than men, individuals with other intestinal or bowel problems tend to experience these effects more strongly, and many who experience it do not feel the same effects every time. Individuals with lactose or sugar intolerances might also be reacting to cream, milk or sugar additives rather than the coffee itself. So beyond the known chemical and biological effects of coffee on your bowels, there is a distinct possibility for unrelated factors being at play as well.

What's it All Mean?

So what does this all mean? We know that it’s not the caffeine. We know it’s not as simple as triggering your metabolism, and we know that it’s more complicated than simply categorizing coffee as a laxative. The short answer to the question “why does coffee make me poop?” is that we don’t exactly know for sure. We do know that is has to do with the acids and compounds found in coffee stimulating hormonal and neural responses in your bowels. We also know that these responses vary from person to person and coffee to coffee. If you want to reduce these effects, give it a little trial and error. Try emptying the bowels before bed, mixing up your coffee drinking habits, testing out other possible culprits or - simply embrace the poop!